On Thursday, January 20, 2022, from 11:00 am to 12:30 am, I moderated a dialogue with my friend Dr. Jeffrey Tsai. Jeffrey is the founding and current President of Asia University (AU 亞洲大學), a young private university in Taichung (台中), Taiwan. The title of our dialogue is “Vision, Innovative Governance and Sustainability, a 21 century higher education paradigm.” Above is the YouTube recording of the entire dialogue. 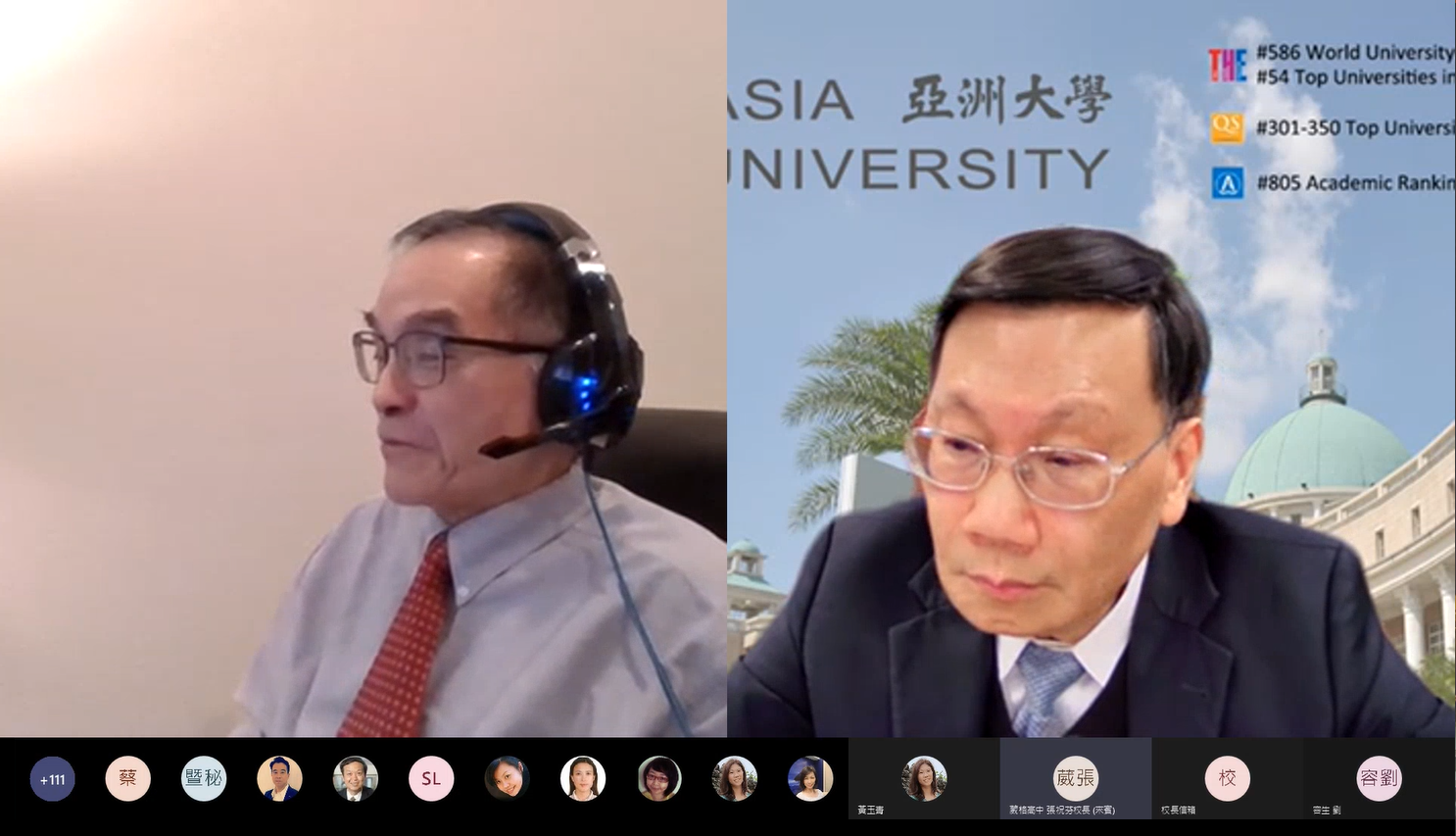 Without ifs or buts, the ultimate and only aim of higher education is to produce citizens that can add positive value to humanity. Our dialogue revolves entirely on this principle.

In the past three decades, a group of extremely competent higher education leaders emerged in Asia Pacific. The first trailblazer is unquestionably Chia-Wei Woo (吳家瑋), who singlehandedly founded one of Asia’s distinguished universities, the Hong Kong University of Science and Technology. The next is Shih Choon-Fong (施春風), who transformed the National University of Singapore, another Asian distinguished university which is now blinking brightly in the international higher education radar screen.

In Taiwan, there are also several well recognized higher education leaders. Individuals such as the late David Chung Lang Liu (劉炯朗), Academician Michael Ming-Chiao Lai (賴明詔) and Academician Lih-Juann Chen (陳力俊). While they were not founders of their respective universities, namely the National Tsing Hua University (國立清華大學) and the National Cheng Kung University (國立成功大學), respectively, through their deep understanding of the mission of higher education and their tremendous EQ, they injected into the universities they were leading a sense of openmindedness and an inquisitive ambiance. Indeed, by doing so, they were able to create a needed globalization flavor in these universities.

It is worth underscoring that among all the universities in Taiwan, in the past two decades there was one which quietly but resolutely introduced to the landscape of higher education a new and visionary form. That university is AU.

Since 2001, led by the founding and current president Dr. Jeffrey Tsai (蔡進發), Dr. Tsai was and still is AU’s main structural architect in crafting numerous visionary intellectual innovations in order to produce relevant products (i.e., students) which can and will value-add to humanity in the 21st century.

What is especially intriguing and maybe even perplexing is that even though most of the top institutions in Taiwan are “public” in nature, Asia University under the leadership of Dr. Tsai is a “private” one.

Besides a certain amount of social stigma of being a “private” university, in Taiwan, the fact that a university is defined as private, which does not receive annual funding from the Ministry of Education, it nevertheless is subjected to the same and severe rules and regulations. For example, even the tuition which is the life-blood of the operational funds of many private universities in Taiwan is tightly regulated by the Ministry. With all the above as preamble, I think it is especially intriguing to have a detailed dialogue with Dr. Tsai, who is the person who guided the university to its prominence in Taiwan today!

In today’s Taiwan, where there are over 100 private universities, many of them with very long history, it is remarkable that Asia University, despite its youth, was able to be ranked by many global ranking systems as the top for all private universities.

As a recent member of its International Advisory Board (IAB), which is a group of individuals with little or no direct connections to Taiwan’s higher education landscape, but who have direct or indirect connections to Asia Pacific, I wrote an account about the Dr. Tsai. However, what I wrote is still only scratching the superficial of Dr. Tsai's vision and aspiration. With these as preamble, it was the reason why it was especially exciting to have a ZOOM dialogue with Dr. Tsai on January 19 for him to expound his vision as aspiration of the university which he founded.

From day one, Dr. Tsai recognized the multitude challenges Asia University faced. In particular, he realized that with 23 million population in Taiwan and having a large number of universities already, what Taiwan needed was not another private university, but one which must be substantially different in style and manner. This would require “thinking out of the box” from the get go!

Let me mention one such innovation which AU initiated that is truly innovative. Perhaps one of the most exciting outcomes was the discussion about the vision of forming a College of Artificial Intelligence in Asia University. Dr. Tsai specifically mentioned that he was guided by a “new” university which was formed in 1968 known as Carnegie Mellon University (CMU) in Pittsburgh Pennsylvania. CMU was the amalgamation of two colleges, the Carnegie Institute of Technology and the Mellon Institute of Industrial Research Institute.

Since it was a new adventure, CMU’s leadership realized that its “newness” presented an enormous opportunity to do something that could leapfrog into a new intellectual area that could have profound global implications. That area turns out to be “computer science,” which at the time was still in its fledgling stage, and often was a synonym for “numerical analyses.” With this, CMU made a concerted effort of transforming “computer science” into an intellectually broad and deep discipline, which they did within a decade.

Leveraging the CMU experience, Dr. Tsai realized that in the 21st century, artificial intelligence (AI) is roughly at its fledgling stage, just as computer science was in the 1980’s. He also recognized that the development of AI will unquestionably have ubiquitous transformative implications for all forms of human social activities, just like computer science!

With this vision and leveraging his president bully-pulpit, Dr. Tsai and his team initiated a College of Artificial Intelligence, which as far as I know, is either the first or only one so far in Taiwan. Of course, what is the outcome of this initiation maybe too early to tell, but judging by how AI has already emerged as the most profound technological and sociological transformation humanity is facing, such an effort by Asia University will surely have short- and long-term enormous benefits not just for the university, but for humanity in general.

From the tone of his discussion in this dialogue, I could detect that to do something as innovative as forming an AI college, it would require “buy-in” not just from his faculty and the students, but also from the Board of Trustees. The fact that Dr. Tsai was successful in this endeavor surely meant that he was as good an administrator as he was an outstanding innovator.

In summary, this was an unusual and profound dialogue in higher education. It is unusual not only for Asia University, but for any university in any corners of the globe.